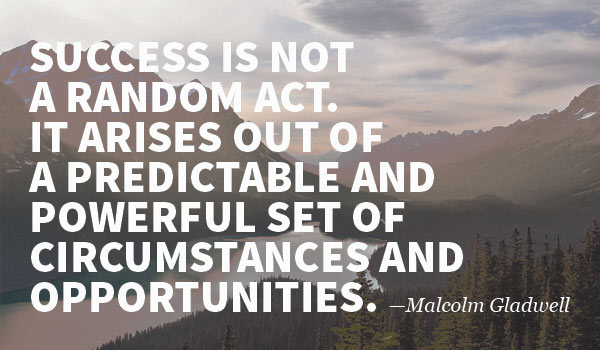 This book is a collection of stories about people who have experience a lot of success. Malcolm Gladwell tells the story of famous people such as Bill Gates and lesser known people like Joe Floem an important American lawyer. He breaks down their success and analyzes what has made them successful. Gladwell asks a pretty basic question about these bright and successful people. Simply put, what makes them different?

Side note: If you’ve not read any of Gladwell’s other books, The Tipping Point, Blink and David & Goliath you should. Though you’ll find a lot of articles out there that can disprove some of his theories and facts, I find his work inspiring and hopeful.

For example, in Outliers, Gladwell talks about the “10,000 hours” rule. It’s the rule that in order to be an expert at anything, you must have invested at least 10,000 hours in it honing your skills. Bill Gates had the opportunity to work at an expensive computer for free as a teenager. This allowed him to get a head start learning and developing his craft. I’ve read experts arguing that 10,000 hours carries no actual weight when it comes to developing skills. Now, Gladwell would probably argue that he never said it’s an exact number you had to hit, he just alludes to the fact that all successful have had at least that many hours under the belt. Regardless of the facts, though, the point is that it takes a lot of time to develop skills to be considered an expert.

What I loved about this book is that it didn’t look at these successful people and ask “how can we be more like them?”. Gladwell breaks down the different circumstances, year of birth, cultural norms and just plain luck. Gladwell argues that for most people it’s a combination of things.

A hypothetical example in triathlon would start with when you were born. A successful, professional triathlete today likely wasn’t born before 1975. They would be turning 40 this year and well past their prime. If they happened to be born in the 80s or 90s they would also need to be born to a bit of affluence. Just to participate in triathlon you need at least a couple thousand dollars for the equipment. In addition, you needed to be born in an area that had good coaching. Triathlon is growing in popularity but you won’t find youth leagues around like soccer, baseball or football. You need time. Time to swim, time to bike and time to run. You need to do it a lot and you need to do it consistently.

Success is impossible without these elements. You don’t see professional triathletes coming from Uganda. But you do Spain, Australia and America.

Gladwell’s point is that up to a certain point, whether or not you experience success isn’t dependent on your skill. It’s depends a bit on good fortune and coincidence. This actually gives me a bit of hope. It’s comforting to know that there wasn’t anything too special about Bill Gates other than his will and desire to learn. I have the same desire to learn be it code, coaching, swim/bike/run technique.

It gives me hope that my desire to learn is the one I can control and should continue doing. It takes a lot time and thought to become an expert and I’m no different from the top coaches out there except I don’t have the length of experience and the trust of athletes, but that will come if I keep consuming information and doing what I can to learn.

Another anecdote from the book is about the stereotype that asians are generally better at math. Studies have been done and it’s not just a stereotype, asians (Chinese & Japanese, specifically) are better at math. The reason can be traced back to two things. The length of the numbers and how you pronounce them. I won’t get into the details but, it makes sense that if a child can learn their numbers sooner and little more logically they’re going to have an easier time when things get more complex.

In the context of coaching or teaching this reminds me that I need to simplify concepts early on in the learning process. Eventually, as things become more complicated we can build on the foundation of earlier lessons. Success doesn’t happen overnight. We need to plant seeds early and water it often.

As a triathlon coach, is this book worth reading? Yes. I think you can pull some wisdom and relate it to your career from any book. It doesn’t always have to be mind-bending and revolutionary. It may simply be a reminder and that’s ok!

If you’re looking for something interesting or even just some inspiration, Outliers: The Story of Success, is a great book and worth the read. It’s not your typical business or triathlon book but I think it adds a lot of value.

Learn more about improving your triathlon business with TRI Coaches
Sign up for the newsletter to be notified when we launch our product..